Greetings RV Enthusiasts.  On this page I will review the Alliance Paradigm 310RL fifth wheel.  The featured photograph shows our trailer parked at the state-operated RV park associated with Castle Rocks State park, near the Idaho-Utah  border.  The RV park itself provides water and 50A electrical service, but no sewer service in the campsite itself.  A public dump station is a mile or so away from the entrance, however.  As noted below, we are very impressed with the holding tank capacity of this trailer, which allowed us to camp several days before dumping.

I especially like this photo because it shows the morning sun on the the rocks in the background.  Castle Rocks is a short, 7-mile drive from the City of Rocks National Reserve, a paradise of formations that attracts both world-class and enthusiast rock climbers, hikers and campers.

For several years, my wife and I have planned to purchase a fifth wheel trailer, and have been watching the market for some time.  A fortune would have it, during the summer of 2020 we discovered a relatively new fifth wheel manufacturer by the name of Alliance RV. Based in Elkhart, Indiana, this brand was formed by pulling top talent from existing manufacturers to spin up their own company, complete with brand new manufacturing lines.  They have succeeded in turning some heads in the industry by sustaining their original value proposition: (1) Maintain transparency and contact with customers, and (2) produce coach, warranted for full-time use, with the key features that customers have asked for.

Incidentally, they didn’t ask me what I wanted (I guess I wasn’t part of their focus group!)  but this coach checked all the right livability boxes for my wife and me.  In addition, I am pleasantly surprised by the access that customers have to the Alliance support resources: I’ve been able to obtain a wiring diagram of the 12v system, for example, as well as answers to miscellaneous questions like, “what’s inside that wall?” or “where does the solar prep wire go?”.

Previously, our search came up with one or more compromises:  The coach was either too heavy or too long, the shower was too small, the bedroom wasn’t tall enough, there wasn’t enough room around the king-sized bed, not enough storage, or the seating arrangements in the living area just didn’t work well. At 34’ 11” long, the Alliance Paradigm 310RL solves those problems in ways that we appreciate:  35 feet happens to be a natural break-point in many of the site length restrictions we have encountered, for example, and at 6’ 4” tall I don’t have to poke my head into a skylight or ceiling fan in order to take a shower!

This is also a 101-inch “wide body” design.  That doesn’t sound like much of an advantage (it’s only five inches wider than the 96” coaches), but it feels very spacious.  At 24 inches deep, the shallowest of the three slides is in the kitchen, but this is directly opposite the living room slide, which is 36” deep.  The spaciousness of the bedroom comes courtesy of a 26” deep “east-west” slide.

We limited ourselves to a 15,000 lbs GVW trailer because that is a typical limit for single-rear-wheel “one-ton” or “3500” variety trucks.    This limitation, of course, is related to the cargo carrying capacity of the Tow Vehicle,  which must sustain the weight of the pin as part of its own Gross Vehicle Rate Rating (GVWR).  I’ll discuss weights and weight ratings in another post, but for now consider the following rough approximation:  A 15,000 lb. trailer (when fully loaded) will apply  approximately 3,500 lbs to the truck bed (via the pin) – a figure that is likely to consume all of the available cargo capacity of a one-ton, single-rear-wheel  truck.  You can see, in the photograph below, that my particular trailer puts about 20% of its total weight on the pin (dry), but we cannot expect that the same percentage will apply when the trailer is fully loaded.  This is particularly true of shorter fifth wheels, where most of the storage capacity is forward of the axle.  In actual practice, I loaded up my trailer to 15,000 lbs on a DOT scale and discovered that, with fuel and passengers, I was right at the GVWR limit of my Truck.

One of the things I appreciate about the folks at Alliance is they include very detailed weight measurements with every trailer .  Of course, many other mfgs publish actual weights for the axles and the pin, but rarely do you see side-to-side weights, which is very revealing!  I have provided a photograph of the build sheet for my trailer, below:  Notice that the Left side of the trailer is about 700 lbs.  heavier than the right side.  Awesome job, Alliance for the transparency!

For those unfamiliar with fifth wheels and weight distribution, there is good reason for this weight difference, left to right.  In a typical “rear living” floorplan such as mine, great care has been taken to optimize available space, and “flow” — the natural movements of people within the trailer.  For example, you probably want the pantry, refrigerator, and cupboard storage all close to the kitchen island, so that the person preparing lunch has everything they need without walking around the trailer.  It also means that the hallway leading up to the bedroom has to be on the opposite side of the kitchen, which in turn means that the bedroom slide and bathroom are also on the Kitchen side of the coach — to illustrate, here is the floorplan of our 310RL, which I lifted off of the Alliance RV website. Notice that every square foot is usable space.  Nice Job Alliance!

While my wife and I don’t have the experienced of full-timers, we immediately fell in love with the “flow” of this floorplan.  It comfortably seats four adults in the living area (without anyone at the dining table) — and every seat can see the TV screen without seeing a chiropractor for neck strain!    Also — anyone can work in the kitchen without their back towards the others in the coach, presenting a very sociable environment very much like today’s “open floorplans” for sticks and bricks homes.  In short, Alliance has made exactly the right decisions re:  floor layout, even if that does produce a heavier driver’s side of the coach.  The tires and axles are sufficiently over-engineered to accommodate this.

Here are some additional things I like about this trailer 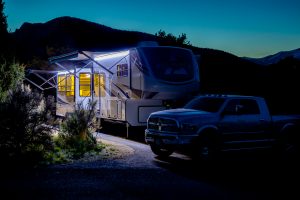 This last one is a bit controversial I guess:  I get that some prefer “fully ducted” ACs, but instead of this approach, Alliance puts three ACs in the ceiling with minimal ducting. You could consider this as a cost savings, and I can be accused of not really knowing what a fully-ducted AC system is like — but with all those disclaimers I like the three ACs and here’s why

Cooling the bathroom requires a bit more ingenuity, and so the Alliance designers put a ducted system upstairs.  Cool air from the bedroom AC is routed to the bathroom, in addition to the bedroom itself.  Adjustable vent fins on the side of the bedroom AC direct air directly onto the bed, as desired.

More on the tanks

I’ve made a couple of comments already, regarding the holding tanks on this trailer, but there is even more detail  that is worth sharing.   Alliance has designed this trailer very carefully in this regard,  a welcome change over other trailers we have researched.  Most notable is that the tanks are supported by steel frames — unlike the flimsy tank slings we have seen before (that’s a real full-timing trailer for you).

I’ve already mentioned that this  trailer has a single 98-gallon fresh water tank, but what I didn’t mention is that this tank is strategically placed slightly behind the axles.  Genius!  Why is that so cool?  While most fifth wheel manufacturers will avoid recommending this, I discovered that this design allows you to  travel with a full tank of fresh water, for boondocking purposes, with only a small impact to  pin weight (the full water tank will tend to lift the pin by a small amount which I have not yet measured or calculated).  This is fantastic.  We were able to load up the basement with tools and supplies, stock the kitchen and pantry (all of which is forward of the axles) and consume all of the trailer’s cargo capacity without exceeding our Truck’s Gross Vehicle Weight Rating via weight on the pin.  And that’s with 800 lbs. of water on board.

The  Black tank is also a 53-gallon dedicated tank, of course.  This works very well because black water does not accumulate as quickly as gray water, and this large of a tank allows you to pre-fill it with a few gallons of treated water before use.   Even when we were drinking bottled water (which we like to bring, in addition to 98 gallons of fresh water!), the black tank was the last to reach its capacity.

Over all, a beautifully designed water and waste system that is very practical and livable.

Before the weather warmed up too much, I was able to put the trailer’s heating system to the test.  The main furnace, of course, is a standard propane-fired burner with a 12v air handler (blower), and there is also a “fake” fireplace which is a very effective electric heater in its own right.  I’ll comment on both, using both objective and subjective measures of effectiveness — tested while morning camp temperatures were in the upper 30s to mid 40s.

The fireplace:  As is common practice when possible, we always choose the fireplace/heater because we’ve already paid for the electricity to run it, and we wish to reduce propane consumption as much as possible.  We are astonished at how effective this heater is, in spite of its small size.  Check out the photo below — it pumps out 315 degree (F) hot air!   As expected, the fireplace struggled to warm the entire coach during those cold mornings, but its performance was impressively effective.  We were able to set its own thermostat and let it run all night, allowing it to come on and off as it needed. 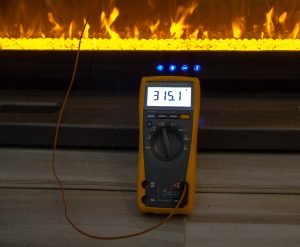 The main furnace is, of course, much more capable.   I gave it a similar test, during a cold, 40-degree morning, and found that in less than 5 minutes the coach was warm again, so I’m certain it would keep things warm in sub-freezing temps and probably close to zero degrees F.    I measured the air temperature exiting the heat vents and found that the furnace was pumping out air over 150 degrees F! 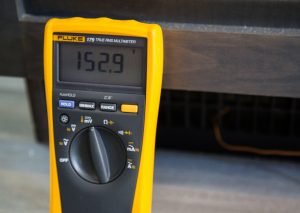 How did it tow?

Overall, I’m quite impressed with the towing performance of  this trailer, paired up with my 2018 Ram 3500 Meg Cab (single rear wheel) truck.  One particular trip provided  a wide variety of road conditions, with both 6% and 8% grades.  On the outbound leg, my truck averaged approximately 11 mpg on the open freeway but closer to 4 mpg while climbing the steep grades. My wife even remarked that she barely felt the trailer behind us – no doubt, at least in part, due to the tight tolerances of my Pullrite SuperGlide hitch, in combination with the RotoFlex® pin box, supplied standard with the Alliance.

The return trip was more revealing: In addition to those same steep grades, I encountered heavy, gusty winds, allowing me to experience firsthand the benefits of fifth wheel towing when the king pin is directly over the axle.   Especially for a full-profile trailer over 13 feet tall, I was impressed with the rig’s handling in those high winds – even with 80,000-lb commercial trucks passing me.  I saw “bumper pull” type travel trailers struggling with sway, even as my rig remained stable.  I could feel the largest sidewind gusts, to be sure, but they presented no sway or oversteer issues.   Of course, I lowered my speed during the strongest winds, just to be safe.

I’ll update this page from time to time with more information, but thats it for now.  For additional reading, check out my blog posts in the menu!