With the topic of biofilms themselves (and why we want to control them) already covered (see PART 1 of this series),  I now present what is more of a purge product review.   You see,  I’m one of those borderline OC folks that has to have “the cleanest spa known to man”,  and I’m always looking for the best way to achieve it. 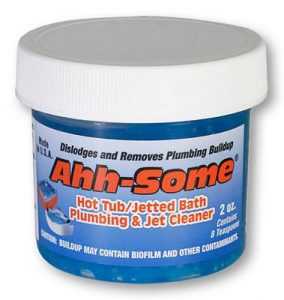 My previous work established a particular product, known as “Ahh-some” as the most effective, at least among the products I tested, and this product continues to be the benchmark by which I compare all of the others.  Because of the extraordinary claims made by its manufacturer,  my working hypothesis is that “Ahh-some  will visibly remove more materials than the others”.   This is a hypothesis that can be proven or dis-proven, which drives my experimental method;  I purge with the “product under test” first, giving it the best shot at releasing material, then I drain, fill and purge again with the same product again.  I repeat this process until no more material is released, to give the product every advantage possible.    I then purge with ahh-some, to see if it releases anything that was left behind.

The Spa utilized in this experiment is the same one  I have used previously:   A 500 gallon Hot Spring Grandee, with ozone,  purchased in the summer of 2013.    As I begin the present effort, I note that the  condition of my spa water is  fairly good, but not perfect.  This water was the first fill after purging with Ahh-some several months ago, but since then my bromine level has dropped to zero a couple of times, after which I used standard  “SLAM” (Shock level and Maintain) treatments to restore water clarity and health.    Even though the water was clear and balanced I could could tell from the feel that it was time to drain.  My measurements indicated slightly higher than normal sanitizer demand as well, suggesting that biofilms were probably present in my spa even though the appearance of the water gave no such indication.

The following photo shows the  water clarity which is evident even with the circulation pump and ozone generator running, just prior to using the Oh Yuk product (foreground). 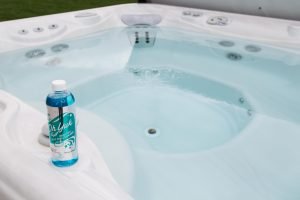 The next photo shows the filter compartment:  Notice the water clarity and absence of any residue. No, that’s not a damaged filter that is a small disturbance in the water distorting the photo 🙂 . 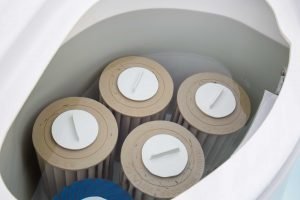 The Oh Yuk label directions specify that the “filter” (singular) is to be removed.  A great many spas (like mine) have more than one filter, so of course I removed all five of mine — but right out of the gate I could tell this product was not positioned seriously against biofilms.   It’s important to remove all filters because of the potential material release, which could clog the filters and starve the pumps. The other clear signal that this product is not a serious purge product is that it prescribes no chlorine dose — more on that later.

Here is a photo of my spa,  right after dosing with “Oh Yuk” in the exact amount specified by the label directions, with all jets running on “high”.   There is not a lot of foam, and there is no material release (yet). 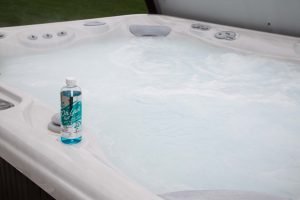 After about 20 minutes I got a result — a very small accumulation on my vessel wall, right where water currents in the spa normally deposit such material.   I let the jets run for a full hour (per label directions), but no additional material appeared, so I concluded that Oh Yuk had done its work within the first 20 minutes.  To accurately capture the product’s performance, I shut down the jets and drained a small amount of water to expose the accumulation of released material: 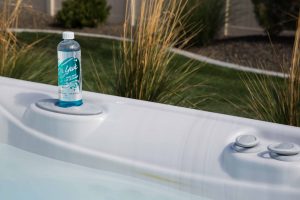 With this small but non-zero result I reasoned that a second purge would likely not reveal anything else, but to give the benefit of any doubt I drained and refilled my tub and then dosed again with the remaining amount of Oh Yuk from the same bottle.  The second treatment produced nothing, even after running the jets for 60 minutes per label directions.  I concluded that whatever Oh Yuk was capable of getting out of my Hot tub, it had done so within the first 20 minutes of the first purge.  Good to know.

The “Oh Yuk” portion of the experiment had utilized no chlorine, as the label directions made no mention of it.  This disturbing —  the use of chlorine during a purge insures that any pathogens released are actually killed — so the folks at Oh Yuk either don’t understand what happens during a purge, or they don’t expect the product to release any bad guys.  So, at my own peril , I decided not to use any chlorine with  the ahh-some  purge either, just to make the experiment fair.  Within 20-30 minutes after dosing with ahh-some  I had a result:  Substantial amounts of new material  on my vessel walls!  $17 worth of Oh Yuk had left behind quite a mess indeed, and $8 worth of Ahh-some was cleaning it up.  The amount of material released by Ahh-some was so substantial, compared to that of Oh Yuk, that I took several photos of the spectacle: 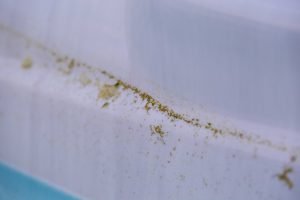 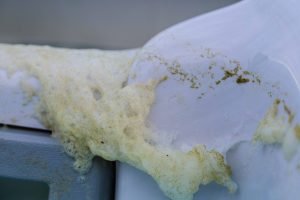 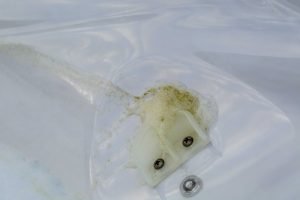 Even after such astonishingly conclusive evidence, I decided to drain, fill, and purge again with Ahh-some to see if any more material was still lurking in my pipes and equipment — this was to give Ahh-some the same chance as I gave Oh Yuk.  Finding no such additional release   I decided to clean my filters in the ahh-some dosed spa (note:  Until now, I excluded the filters from the experiment because the Oh Yuk label directions do not address filter cleaning).  Upon installing the filters in their normal positions, I did obtain a small amount of additional release which I was able to wipe up with a soft micro-fiber cloth, rinsing in a separate bucket of ahh-some dosed water.  This step is my protocol for achieving what I call the “cleanest spa known to man”:  An ahh-some dosed spa, with filters in their normal positions, and releasing no new material as shown in the next photo: 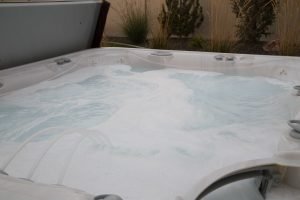 Aside from the obvious conclusion that Ahh-some is the more effective product, there are some important observations which I made during the experiment:

For the above reasons, my assessment is that Oh Yuk is  not an effective biofilm release product.  I will note that Oh Yuk will likely produce a result in a poorly maintained spa, but its performance pales in comparison to the  benchmark set by Ahh-some.

This concludes the three-part series of foundational material, establishing the nature of biofilms and the right way to get rid of them.  For additional content please check out the blog categories in the menu.