When my wife and I started looking at fifthwheels, our research included “the refrigerator issue”  —  RV absorption type refrigerators and their less-than-stellar reputation for temperature control.   These units are known to provide good service on either propane fuel or 120v electricity, but their reputation of poor temperature control gave me some pause.  In the end, however, we heard good things about the latest crop of Norcold units supplied in our 35-foot fifthweel, so we opted to go with the tried and true.

Knowing the weaknesses of the absorption type refrigerator, however, I set out to find a good temperature monitoring solution, which is the subject of this post.

My first discovery was influenced by influencers — I found that some of the more prominent RV YouTubers leaned towards a dedicated RV refrigerator thermometer — you put a sensor  inside,  and then place a dedicated screen of some sort outside on the counter or even mounted on the fridge itself.  There are several variations on this theme, but the bottom line is a dedicated screen.  Here is one that must have received a lot of links and generated lots of revenue, as it has even received the “Amazon’s choice” award — the precise criteria for which remains mysterious 🙂

(photo lifted from Amazon).   Interestingly enough, my research into this particular solution just did not inspire confidence — partially because the price was so obviously manipulated, which turned me off cold — Amazon wanted nearly $80 for this one last winter!  The Amazon reviews were a mixed bag as well, especially for something as popular as this one.    I just found too many plausible comments about reliability and accuracy that appeared to be consistent, at least to me.  Cheep manufacturing does that though — sometimes you just get unlucky.

Frankly, had Amazon not tried so hard to play pricing games, I probably would have just taken my chances with this one.  But that’s the beauty of capitalism — the value of a product is determined by what people are willing to pay, and I wasn’t willing to pay that much!   I expanded my search with a question:   Why not just put an ordinary multi-sensor weather station in the trailer?   I have one something like the below at my house today, and it works well for its intentions, although I haven’t tested its accuracy.  I even brought it into my trailer to test it, and found that it works, although it was slow to react to temperature changes.  You don’t have the fancy white colors but you get what you need:  basic temperature monitoring.

(Photo lifted from Amazon) Here is a “weather station” option, found on Amazon for $42 at the time of this writing.  Initially, I felt this would be a good alternative to the fancy white one, but then I remembered the reaction time to temperature changes, so I let the feeling pass.

One of the above two options would probably be in my fifthwheel right now, were it not for the discovery of a completely new type of solution that challenged my perception of  the current best practice for RV refrigerator monitoring:   Why should I pay for a dedicated display when I already have one in my hand? In addition, why would I trust a monitoring device that makes only weak statements about accuracy and reliability, when we’re talking about preserving food?   With the cost of the display itself out of the picture, I reasoned, the right solution now has the chance of being more accurate and reliable!

(photo lifted from Amazon).  Fortunately for me, I found what I was looking for — a very small sensor, powered by an ordinary CR2032 battery, that would push information to my phone.  And it was less than $30!  Granted, this is the “per channel” cost,  but even the cost of two is still less than the (inflated/manipulated) price of the first unit, above.

The Tempo Disc utilizes a low-power Bluetooth connection to your smartphone, which means it does not go through the traditional pairing process – it simply broadcasts a data beacon to the (free) app, which does the heavy lifting. There are no subscription costs.   The manufacturer is Blue Maestro, an International company with headquarters in Houston, TX,  providing environmental monitoring solutions for a wide variety of industries including refrigerated transport, construction and health care.  Their sensors include temperature, humidity, dewpoint, barometric pressure, and button presses (count).

Tempo Discs have some critical reviews on Amazon but many of the eye-openers I found were old — some as much as three years.  After reading up on the company’s website, I concluded that their core business depends so heavily on reliability and accuracy that they probably wouldn’t have survived to the time of this writing,  without addressing the issues expressed in the Amazon reviews.  My 25 years of experience selecting and evaluating  Vendors in the IT space has taught me that the way in which a company reacts to issues is often  far more important than the issues themselves.  As far as that is concerned, the Amazon review system itself is a very poor Vendor scorecard, especially for companies making real time changes and improvements.  Certainly, it presents real feedback from verified buyers, but it is blind to improvements over time.

At the end of the day I decided to give Tempo Disc the benefit of the doubt — and so far I’m impressed.

It took me all of five minutes to download the app and connect to my three sensors, which for test purposes I clustered together in the same place just to see how well they agreed with each other.  I used my Fluke 179 multimeter with a “type K” thermocouple temperature sensor,  placed in the middle of the three sensors.  To my astonishment, all three sensors agreed with each other to the nearest tenth of a degree (F)!  In addition,  they were within one tenth of a degree (F) agreement with my Fluke, as shown below.  Just due to localized temporary environmental conditions I would not expect such close agreement between three sensors, but this does show that Blue Maestro has achieved the accuracy goals that  are represented on their website. 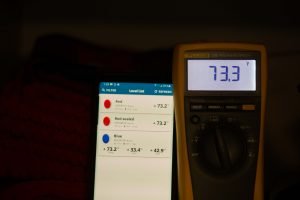 In this photo, my Fluke 179 is on the right, and my Android phone is on the left, running the “Tempo Plus 2” app and displaying data real time.  The three sensors are behind these two devices, as close to each other as physically possible and surrounding the Fluke temperature probe.  All three sensors read 72.2 degrees (F), and the Fluke reads 73.3 degrees (F).  impressive!  If you look closely you will notice that I have labeled the sensors according to Temp Disc’s own nomenclature:  The blue one measures Temperature, humidity and dewpoint, while the Red sensors measure only temperature.  The “Red Sealed” sensor is IP67 rated, and particularly interesting to me for its potential to  place on the outside of my RV. 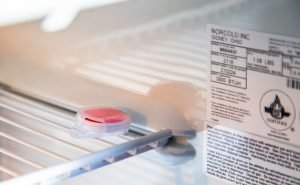 Here is a screenshot of my phone running the “Tempo Disc 2” app.  I have selected the “Freezer” sensor (the red sealed one). Looking closely you will note that the first part of the graph represents handing and experimentation, but you can clearly see the point in time when I installed it.  My RV freezer is working just fine! 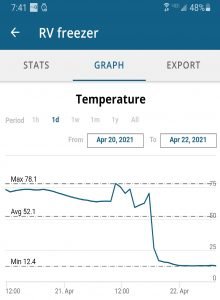 In addition to the accuracy advantages of a sensor intended for food transport and health care, there is another  interesting advantage to this solution in the RV context:  You can monitor your freezer temperatures without going inside or carrying around a dedicated display!  From the engineering perspective, this is an elegant solution:  A very low-powered sensor that  transmits data directly to you phone.  In addition, the real-time data transmitted to your phone is stored in a small memory location within the sensor itself — for later download!  This is a great boon to those who really want to study temperature performance over time, especially in an RV refrigerator.  In actual practice, the broadcast range is pretty impressive as well — both for the real-time data display and the “historical data download” function.  I tested two scenarios, both of which were profoundly impressive given that only a little CR2032 battery was pushing data over the air.   Here’s the results of my range experiments

Its important to underscore that these little CR2032-powered sensors do not have WiFi radios in them and will not transmit data to the cloud — a much larger battery (and a WiFi signal) would be required for that!   From the sensor’s perspective they just want to transmit their data beacons over bluetooth.  This is to preserve reasonable battery life, which I am told is 1 year at room temperature.  The sensor in my freezer sees temps close to single digits (F) so I’m not expecting a 1-year life for that one.

Did you mention accuracy?

One of the things I like about Tempo Disk is accuracy — they use the same hardware for all industry use cases, which means you can obtain the same accuracy in your RV as a pharmaceutical company would for the transportation of medicine.    All you have to do is purchase a calibration certificate that will compare your sensors with a United Kingdom Accreditation Service Certified Thermometer — in a controlled environment.  Such an exercise  would allow you to simply enter the provided calibration offsets into the app, and voila you have industry-leading accuracy.   The industry disruption here, in my opinion, is the cost:  For a batch of ten sensors, the calibration certificate is less than $36.

In an RV refrigerator, a few degrees can mean the difference between frozen lettuce or spoiled mayonnaise, especially when driving down the road  — I have already accounted for a 3-degree (F) difference between my Tempo Discs and my weather station,  with which I have been comparing.  As I mentioned earlier,  my Tempo Discs agree with each other to the nearest tenth of a degree (F) so I’m going to trust them without additional calibration — and I’m going to ditch my weather station!

What about the cloud?

It seems that, today, you just can’t utter the words “wireless solution” without a cloud expectation. I find this perfectly understandable for remote monitoring of environmentally-controlled transportation, and for this purpose the Tempo Disc solution does have a gateway device which accepts the data transmissions from the discs an then uploads them to the cloud for either later or real-time review.     I have not tested this part of the product offering, although I can see the value even in the RV situation — if you intend to leave your camper for a long period of time, and both you and the camper have internet connectivity.

There is a significant advantage to staying local – no internet connection (not even for your phone) is required to use the solution.    I actually prefer that the sensors store their own data “on device” for upload at a later time. The solution runs circles around any of the “dedicated display” solutions, in my opinion, and if I have the need to monitor my refrigerator from more than 120 feet away I’ll be looking into the gateway solution.