Greetings RVers.  In this post I outlined my RV plex solution as a combination of three things:  A streaming stick, a router, and a “Network Attached Storage”  device, or NAS.  Yes I am aware that some consider NAS to be out-of-character for an RV, but I’ve had such good luck at home with such a solution —  I decided to try it in my fifthwheel.

Now, lets get to building an RV-based Plex system capable of streaming content without an internet connection:

The basic objective is to build the RV network with it’s own router.  My first choice for this was the Pepwave SURF SOHO mk3 which I purchased from the 5GStore.  The unit was in stock, shipped promptly, and the folks at 5GStore were very helpful as well!  I was able to exchange emails with them about my setup until I got it working.  Here’s another look at the network diagram:

I like the SURF SOHO because its not a mainstream consumer-grade router, and because it allows that magic thing called “Wifi-as-WAN”, which allows it to connect to campground Wifi (or your home Wifi) all the while broadcasting a different network subnet inside the RV.  That means your home Wifi router can be on 192.168.0.1 , and your pepwave router at 192.168.50.1. In the scenario described in the diagram, the home router (not shown) actually assigns an IP address to the Pepwave’s “Listen on Wifi-as-WAN” interface.  This accomplishes two things

The SOHO is a very capable router, and even has some advanced functions, but the “happy path” (most common settings) are easy to configure:  I found it no more difficult to set up than the standard issue router supplied by my home ISP!  Sure, some basic networking knowledge helps, but the SOHO is just not that difficult to configure.   Even Wifi-as-WAN was super easy to set up — I had my router working for the first time in about 60 minutes, set up with some obscure local subnet that is less likely for bad guys to guess, broaadcasting both 5GHz and 2.4GHz WiFi into my RV while providing internet connectivity via my home network.

One of the cool  things I like about the SOHO is that is provides for many different WAN sources, and allows you to prioritize them in order of importance for failover purposes.  In addition to wifi-as-WAN on both 5GHz and 2.4GHz,  the router supports USB cellular modems — including tethered Android phones — as well as celluar modems via its WAN (ethernet) port.  Of course, the wired ethernet port can also be used, although that is not likely to happen in the RV situation.  However, the wired ethernet WAN port means this puppy can serve as your home router as well —  It even supports “VLAN tagging” which some ISPs (like mine) require.

To set up the prioritized list of WAN sources, you simply drag a WAN source to the desired priority level.  The SOHO will connect to priority 1 first, and if that fails or becomes unreliable it will switch to priority 2, while it keeps trying priority 1.  In the screenshot below, for example,  I have the 5GHz Wifi-as-WAN source as priority 1, and the 2.4GHz source priority 2.  I don’t have a wired WAN or a cellular modem WAN source, but if I did those could be added to the list.

There have been some reports of the SOHO misbehaving with certain firmaware versions and I highly recommend this gentleman’s website for some interesting bedtime reading on this subject.  Michael Horowitz is very experienced in router securty and provides some  helpful insights especially around firmware versions.  After reading Michael’s comments about pre-8.1 firmware issues,   I decided to take a chance on version 8.1.3 — and it’s working beautifully for me.

One of the unique features of the SURF SOHO is that it can be a VPN server, which means you can log into your private network from another network entirely.  This is exactly what I wanted — when parked at home, I want to leave my network (and NAS) running in the RV, but I want to access it from my home network — for example, to add new content. This is possible because the Wifi-as-WAN “listen on” feature in the Pepwave actually has it’s own IP address on my home network.   Therefore, we can set up a Virtual Private Network (VPN) tunnel from inside the home network to this address.  Here I will provide the detailed steps, as they are not abundantly clear unless you are an IT professional:

Set up the Pepwave: 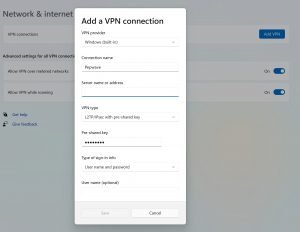 We have one more step to go — we need to configure the Windows 11 network adapter settings, so that the Pepwave VPN server will recognize the incoming request: 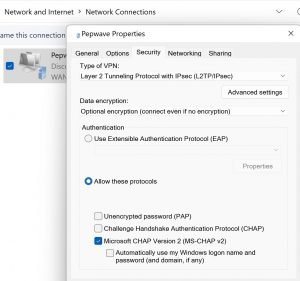 Thats it! You now have visibility into your RV network, for example, to log into the Pepwave router itself, or to access any other client endstation (such as a Synology NAS, which I’ll cover next).

Set up the Synology

After setting up the RV network, I attached the Synology DS220+ to the LAN1 port of the pepwave and fired it up (well, after loading hard drives!).  The Synology system itself is very nice to work with as well.  I won’t go into the click-by-click here either, but there are a few details of interest:

Now for PLEX itself

Once you have the Synology running like you want, and Plex Media Server is installed,  its time to load content and configure plex. Its important to point out that Plex is, fundamentally, designed to work with a live internet connection. Its a rather chatty app, and utilizing cloud resources a which only means there are some special tricks you have to perform to coax plex into running without internet.  There are even some on the forums who counsel that Plex won’t work without a live internet connection — and I have certainly  found that to be true for one particular streaming client (a Roku Ultra).  However, as you will see below, the streaming client itself is important to make this work “off grid”.  Here’s my list of tips:

By the way — the DS220+ has enough horsepower to transcode on the fly, so theres no reason to build “optimized versions” of your content.  I keep my content small anyway — reduced in size to 1080p/30 with handbrake just to conserve disk space.  This isn’t a 4K home theater this is an RV!

See anything here that I missed?  drop a comment below and let me know if something isn’t clear