In this post, I continue my passion for testing spa purge products, and exposing myths and marketing hype, with a test of two new products, “SeaKlear” and Silk Balance “Clean Start” against ahh-some.

SeaKlear
My first test in this round is the familiar product, “SeaKlear”, a  blue colored liquid who’s active ingredient is a weak concentration “Quaternary Ammonium Cations”, sometimes referred to as  “QUATs”.   As far as I know, this is exactly the same product that I tested in 2016 although, as you will see later in this post, its blue dye may be different now (I did not notice it previously), and may have even colored the result, quite literally.  Another reason I chose this product is because my local spa store, from whom I purchased my Hot Spring “Grandee” spa, recently made a business decision to carry this product instead of Silk Balance, “Clean Start”.

Silk Balance “Clean Start”
In addition to the reason given above, I decided to test this product because the Silk Balance company has substantially changed the product formula since my intial 2016 review referenced in the Hot Tub home page (the old product packaging is shown here). At the time, the Clean Start product was nothing more than ordinary grocery store Borax granules in a really expensive container — and it’s performance in my 2016 tests reflected this (it failed miserably).  The product has changed for the better, and now contains  a small concentration of a “QUAT”, similar to that found in SeaKlear, in addition to the Borax.   What I found particularly intriguing about the newer Clean Start product is that it, like SeaKlear, also contains a dye that appears to influence the visual impact of the material it releases, at least in my tests.

Those who have followed my work know that “Ahh-Some” (aka “Serum Total Cleanse”)  is the standard by which I measure all the others.  Ahh-some gel is the only purge product on the market today (as of this writing) that has been independently tested by  the Center for Biofilm Engineering (see the content referenced on the Hot Tub home age), who found that the product, by itself, is effective in killing “Pseudomonas Aeruginosa” along with a handful of other pathogens that can find their way into your plumbing.  I have found, over the years, that the company responsible for manufacturing “Ahh-some and ‘Total Cleanse”  knows what biofilms are and how to control them.  This is the same company who also produces an interesting water maintenance product, known as “Hot Tub Serum Total Maintenance”, which is  EPA registered to remove biofilms and slime-forming microorganisms when used on a regular basis.  I will have more to say about “The Serum” later on, but the primary purpose of this post is to test the three purge products listed above.

I began this series of tests with approximately 6-month old water that had been used at about 2-3 bather hours per week.  In addition, prior to these purge tests I conducted some sanitizer decay-rate tests using the afore-mentioned  “Hot Tub Serum”.  You can probably find that post in the archives.   “The Serum”, as I call it, allowed me to recover nicely from deliberately-neglected water (I let chlorine go to zero and the water go bad/cloudy).  I also found that “Serum” provided a measurable improvement in my sanitizer decay rate — information that will become important in the conclusions section but is provided here for context regarding my ‘ready to drain’ water.

Upon adding the recommended amount of SeaKlear to my used water, I found that the product did produce a small outcome, which is shown in the photos below.  What I found remarkable about the SeaKlear release was its very greasy, blue-colored  appearance.  I attributed the greasy texture to the fact that this water had seen a few bathers with suntan lotions.  The color appeared to be an intentional consequence of the blue dye in the product.  The first photo shows the typical location in my Hot tub where material accumulates on the wall  — notice the blue release there.  The second photo is a close-up shot of the material itself. 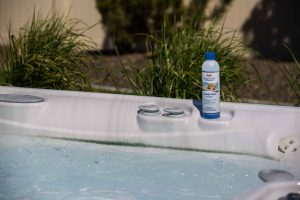 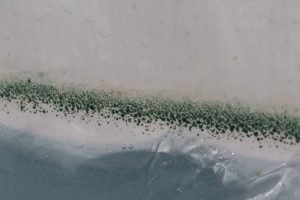 The small amount of material released by SeaKlear was of no surprise — I typically release several times that much with Ahh-Some (and it is never greasy or blue like this release was).  However, I will give credit where credit is due — SeaKlear released some material and thats a good thing.

After draining the SeaKlear-dosed water I refilled per my protocol, balanced the water, and then dosed with Silk Balance “Clean Start” to see what this product might do.    This result was interesting because, as the below photographs show, the product released a completely different type of material than did SeaKlear, from which I concluded that Clean Start was releasing something that was lurking under the grease that SeaKlear released.   The  material released by Clean Start was very small in volume, and very easy to wipe up, but the most remarkable characteristic  was its color — the product’s red dye produced a rather dramatic result from an otherwise lackluster performance –not terribly surprising for a company that previously repackaged ordinary Borax in an expensive container.  Even so, it is appropriate to give credit where credit is due:  The new Clean Start formula is an improvement, and it released some material even after the SeaKlear purge.  So thats a good thing.

(Notice the characteristic pear-shaped “Clean Start” packaging in the photo below.  This is the new formula). 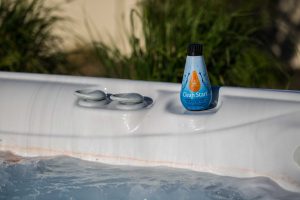 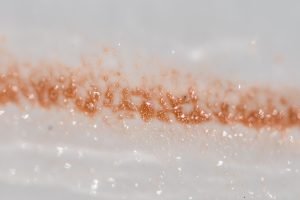 SeaKlear the second time around

To really make the experiment interesting I decided to purge again with the remaining amount of SeaKlear product, just to see if Clean Start had left anything behind — and to also make it even more challenging for the Ahh-some test coming up.   After draining the Clean Start-dosed water, I re-filled again with fresh water and poured in the remaining SeaKlear:  The 2nd SeaKlear dose produced a very small blue-colored release in the filter compartment but did not produce any accumulation on the vessel wall. This told me the material was probably not a new biofilm release, but more likely trace contamination from the previous incomplete drain — just dyed blue to impress. I wasnt impressed. 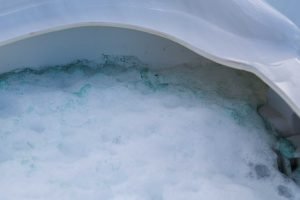 But now it was time to take the Ahh-some challenge:  Would Ahh-some produce a result after three previous purges had done their work?  The answer is found in the following photo:  Notice the absence of any dye or color tint to what looks like a familiar biofilm release from  Ahh-Some.  The amount of material was small compared to previous experiments, but I had to remember that three previous purges had already been accomplished.  In addition,  I had been using the company’s “Serum” product as well, which also controls biofilms on an ongoing basis with regular weekly use, which I had faithfully done. Even so, the superiority of Ahh-some compared to the others was clear because it released nearly as much material than the other two combined – and it wasn’t dyed any particular color just to impress. 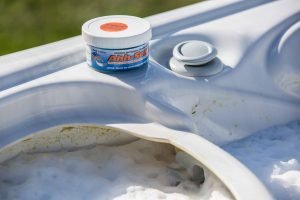 The last part of the experiment revealed something completely new to me.  Recall that in previous experiments I  demonstrated that filter media itself also harbors biofilms, and that it is good practice to clean the filters in the vessel itself while it is dosed with ahh-some.  My previous work found that adding the filters to an already clean spa (dosed with ahh-some) produced measurable amounts of biofilm release,  but this time I was astonished to find none.  None!  As you can see in the photo below, I suspended my five filters on a 7 foot length of PVC pipe,  to prevent them from damming up the skimmer and preventing water flow.  Once I added the filters to the ahh-some-dosed vessel,  I was expecting to see some small amount of new material release on the sidewalls but I did not. This astonishing result demonstrates how effective the Hot Tub Serum really is for controlling biofilms:  Look closely at the photo, especially at the vessel walls — there is no accumulation as I obtained in previous experiments. 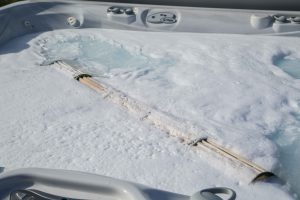 In this experiment I learned more about the “Serum” than Ahh-Some, primarily  because the superiority of the latter has already been clearly demonstrated before:  This time I just found two more purge products that don’t work.  After 2,000 gallons of water and boat load of time, here is a summary of my findings from this experiment: