In the foundational materials on this site (see the Hot Tub  home page) I highlighted that biofilms can survive chlorine concentrations of 1-3ppm — levels that some authorities still promote for regular use.  In addition to ahh-some as a purge product, Hot Tub Serum (or “Serum Total Maintenance”) gives us another tool in our toolbox to combat the problem of biofilms and “bad guys” in general.   Here are the major points of interest that I have established to my own satisfaction via experimentation:

Now for the fun part.   My next objective was to find out just how long my water would survive with only HOT TUB SERUM present in the water — and no Sanitizer.   I would not be testing the sanitizer decay rate I would simply measure the amount of time it takes for the water to go bad, with zero sanitizer present.   Mindful of the manufacturer’s claims and the label directions (I was about to go well beyond the intended use, with water un-protected by a known sanitizer), I wasn’t sure what to expect but there was only one way to find out:  I used the spa as I normally would, just to introduce a bather load,  but I did not add any sanitizer after getting out.    I left the spa unused, as an experiment to see what happened.   Here’s what happened:

1.  After two days my water was still clear and my sanitizer  level had only dropped from 5ppm to 1.2ppm — that’s a little steeper of a sanitizer decay rate than a normal “no bather load” would produce, but I had to remember that I had just introduced a deliberate bather load to start this experiment — so this decay rate was expected.

3.  If that wasn’t fun enough I decided to go one step further:  Having finally obtained bad/cloudy water, I now had the opportunity to see what Serum could do to help the recovery process, all by itself.   I dosed my spa with approximately twice the manufacturer’s recommended weekly amount but added no sanitizer or shock treatment.   Within one hour I started seeing small accumulations of material on my vessel walls and in my filter compartment — as shown in the photo below.  I decided to wipe up this residue with a micro-fiber cloth (essentially supplementing my filters).  I also ran the jets for a few minutes to aid this process. 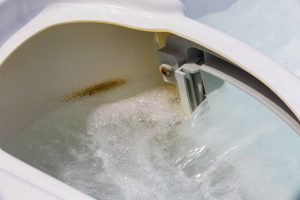 Here is my filter compartment after adding Hot Tub Serum to known-bad water:  Notice that it produced a “mini purge” by depositing material on the vessel walls.  Using Hot Tub Serum in this manner is WAY outside of the manufacturer’s intentions, but it allowed me to see what it was capable of doing    At the 24-hour mark, I observed a striking improvement in my water — still with NO SANITIZER!  The photo below shows the Before (right side, bad water after 50-58 hours) and the After (left side, 24 hours after dosing with  Hot Tub Serum). 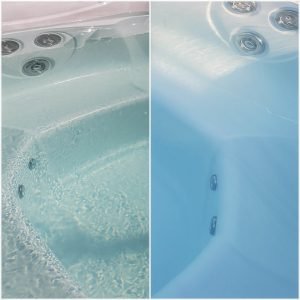 This is an astonishing result:   The Hot Tub Serum  formula had restored water clarity to about 80% in 24 hours — without the aid of any sanitizer or shock.  That last 20% of water clarity (and safety — remember this is an experiment) would have to come from a real sanitizer such as chlorine or bromine.

Some have suggested that this performance is due to the water clarifiers present in the ‘Serum. Others think I am promoting something dangrous ,when I am only reporting results.  Have you ever tried to clean up bad water just with the use of a traditional clarifier?  The water clarifiers I have used don’t leave biofilm deposits on the vessel walls :-).

The “Whole” is greater than the “Sum of the Parts”

No, I will not go without a real Sanitizer,  but this experiment did convince me that the combination of Hot Tub Serum and Chlorine/Bromine is a profound success. To prove this out even further,  I then added a shock-level of chlorine, and achieved full water clarity in approximately 8 additional  hours.    Normally, such a rehabilitation would require a “Shock Level And Maintain” (SLAM) regimen but this result required only one sanitizer application (the “Shock Level” without the “maintain”).

At this point it is  wise to remember that Hot Tub Serum is a companion product to and does not replace a sanitizer.  For a while, that sounds just like the marketing claims of enzyme-based products (such as Spa Marvel).  Serum is not a sanitizer — it is an EPA registered biocide when used as directed (9% “ADBAC” for the chemists among us).  That means it kills bad guys  — when pushed to its limits it profoundly helps the water recovery process.