Greetings hot tub enthusiasts.  This post is another in my series of purge product shoot-outs.  As readers of this blog know, I test purge products from time to time just to see if I can find a better one (for more information please see my Hot Tub Maintenance Home Page).  I normally purge my spa on every drain (yes, every drain), which gives me the opportunity to perform such tests on a regular basis.  As per my normal protocol, today’s shoot-out involves another challenge to the current king of purge, a product called “Ahh-some”, otherwise marketed as “Serum Total Cleanse”.  For additional back ground on the these two products and their relationship, please see the post, “ahh-come vs Serum Total Cleanse – is there a difference“?

An interesting find on Amazon, “Bio Ouster”, is relatively new to the market.  The pricing isn’t particularly attractive ($26 per 500-gallon purge) but the stuff intrigued me enough that I decided to order some.   Check out the creative packaging from the below photo shown on Amazon: 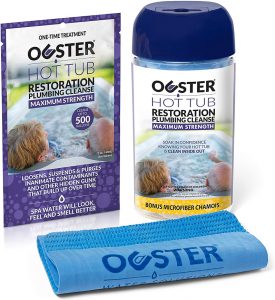 The purge product itself is in the upper left of the above photo — a squeezable pouch filled with blue gel that looks exactly like Ahh-some!  The rest is packaging  — and a free cloth with which to wipe things down.

Those who have followed my work will note that in my early experiments, I found that it can take several purges to correct a really bad biofilm problem.   However, now that I use ahh-some regularly, I find that a single purge with ahh-some is sufficient — and leaves nothing behind.  I normally dose with ahh-some when draining my spa, but whenever I purge again, I get no result the second time around.  This sets up my normal protocol nicely:  I simply purge with the challenger first, and then purge again with Ahh-some to see if I get any new release.  If I get no new release,  then I know that the challenger did not leave anything behind (note:  this hasn’t happened yet).

For this test, my spa wasn’t particularly contaminated, but it was time for a water change.  On one occasion, I  let my water “go bad” deliberately,  just so I could experiment with a product called  “Hot Tub Serum Total Maintenance” (a weekly maintenance treatment) as supplement to the normal shock treatment that one would normally prescribe in such a situation.   But after all of that was accomplished it was still time to change the water.  Time for an Ouster / Ahh-some shootout. 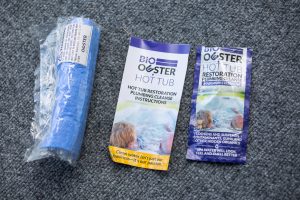 In this photo you can see the three major components of the “Bio Ouster” or simply, “Ouster” packaging.  On the left-hand side of the photo is the wipe-down cloth;  in the center is some printed marketing and instructional materials, and to the right is the product itself in a “squeeze pouch’, much like an oversized packet of Ketchup.

Following the label directions, I squeezed the entire contents of the “ketchup packet” into my spa and grabbed my camera. Since the directions didn’t mention the use of Chlorine, I wondered what the manufacturer actually intended for this product to release and how much they understood biofilms — after all, if a chlorine-resistant layer of biofilms had provided safe-harbor protection for some nasty pathogen, wouldn’t you want chlorine on board to kill it?

Aside from that, my measure of success  (as in all of my purge experiments) was to note the amount of material released —  “more is better”.  I couldn’t test for actual biofilms (that would be frightfully expensive), but since the released material could either be biofilms or a food supply for them, it doesn’t really matter — what matters is that the product releases them.  Here is a photo of the Bio Ouster result: 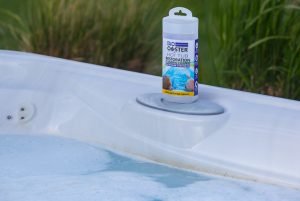 As you can see, the product did release something, which was un-ceremoniously deposited along my vessel walls.  So far so good!  The nature of this material was the familiar brownish-colored goo that a purge normally produces:  Most likely a combination of biofilms and other non-oxidized contaminants.  The actual volume of material released was small, but consistent with the fact that I purge my spa every drain —  this might be all that was available to release!  My next step was obvious:  In order to really test the ‘Ouster’ performance I would have to drain, refill, and purge with Ahh-some.

As in all of my purge experiments, I give a small advantage to the challenger,  by allowing it to work in hot water.   To clean up the Ouster result, I drained my spa, wiped everything down as I normally do, and re-filled with cold water in preparation for the Ahh-Some test.  This time I used the purple colored gel called “Total Cleanse”, which is the same product as Ahh-some, only with a different label and different coloring.   Well guess what:  Bio-Ouster left something behind… 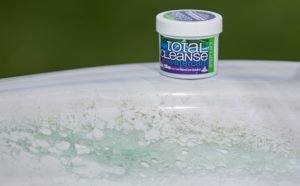 Those who have purged many times will usually find that a “second purge” will often show a small amount of material that is easily wiped up with the microfiber cloth.  I have learned to recognize such “left over contaminants” by their appearance as well, so I was quite intrigued with what I was about to see.

As you can see in the above photo,  the “Total Cleanse” gel released a small amount of material that Ouster had left behind — but it wasn’t the amount of material that caught my attention;  it was the nature of it.  This material had the appearance of straight-up biofilms — this was no ordinary “left-over contaminant”!  The stuff had the consistency of sticky flakes, and a unique-looking foam that also stuck to the walls ( look  just below the “Total Cleanse” Jar, in the photograph).  These two results — the sticky flakes and the persistent foam – told me that “Total Cleanse” had indeed cleaned up nasties that Ouster had left behind:   Normally, in a “second” purge, ahh-some produces substantial amounts of foam, but it subsides normally and doesn’t stick to the vessel walls like this stuff did.

What did I learn from this experiment?  A few points of interest:

For more information specific to biofilms, please see the foundational materials on my “Hot Tub Maintenance” home page — in the navigation menu.

Here’s to getting all biofilms — not just the easy ones!