Greetings RV enthusiasts.  This post is about the problem of RV dealer service

In a previous post on this subject, I outlined the set of issues with my trailer, expressing the opinion that my experience was probably on the favorable side, compared to others.  As regards the trailer itself, I still believe this to be true. Alliance RV produces good quality trailers and they have been exceptional in their support.  In short,  I would not buy a trailer from anyone else.

My experience with dealer service has not gone so well, however, and thats where the weak point of the RV industry is.  After one year of RV ownership, I can tell you that the RV dealer’s cash cow is sales, not service, so you can guess where the investments and process polishing go.

I’ll say this up front:   If there is anything that should give you pause, before buying an  RV, it is the subject of dealer service.  The comedy of incompetance that I have observed is just appaling — so appaling, in fact, that I’m not sure I would purchase an RV again — unless it was an Alliance.  Without Alliance in your back pocket, I just simply would not do this.  I’m actually looking forward to working directly with Alliance, after the 1-year warranty expires, as this will remove the dealer from the equation.  That will be very good.

At the dealer, I observe no end-to-end responsibility to make sure that repairs are completed.  Things happen and people appear to be working, but the left hand doesn’t know what the right hand is doing.  When they fix something, they break something else or cause cosmetic damage.  When they mess up, they apologize but nothing changes.

Additionally, there is a culture of “I’ll do my job and the next step belongs to someone else”, which means work happens in silos and there is no communication between them. If you were to follow any arbibrary work item through the dealer’s service process, you find that work happens, then it stops, then it happens again, and then it stops.  Sometimes it stops for  weeks at a time, with no communication with the customer!  Yes, there are many challenges facing RV dealerships that aren’t present in auto dealerships, but here I am talking about things that are within the dealer’s control.   When the dealer starts hiding behind external challenges I say “don’t tell me about your challenges, tell me what you are doing to fix them”.

they don’t get fixed.

A short Chronology of in-warranty repairs

I’ll start in early October, 2021, when  I listed out a set of issues that required resolution, sent email with photos and clear discriptions.  the list included:

November 8, 2021:  I took the trailer into the dealer to address the above list, and I found out that the three leaking hydraulic jacks had not been submitted yet for warranty replacement.  With a series of emails to Alliance RV, I accelerated this process to bring in replacement jacks.  Through the sharp eye of one particular service writer, four jacks instead of three were replaced.   This is to illustrate that in between the regular drama of appaling incompetance, disorganization and blaming others, there is an occasional bright spot in the experience.  I will not forget this particular service writer who’s quick action saved me from camping with leaking jacks.

December 1, 2021:  The trailer finally made it into the service shop after sitting on the dealer’s lot for four weeks.  Here’s what they did:

December 7, 2021:  trailer was returned to me, with these outstanding issues

January 4, 2022:  I summarized the outstanding issues again via email to the dealer

January 21, 2022:  Alliance bypassed the dealer and ordered a local repair shop to fix the roof-top staple issue described in October, 2021.  This was highly succesful

January 25-28, 2022:  The refrgerator repair was stalled, due to lack of information, so I supplied photos and documentation of the refrigerator door issues (“dr” code). Working with Alliance directly, I obtained a warranty replacement for the door itself.

February 8, 2022:  I corresponded with Alliance for guidance on the roof-top wiper seals (for the slides).  Alliance supplied very clear instructions to remove and re-install the wipers slightly higher — so that not as much rubber material  “bunches up” when the slide is retracted.

February 15, 2022:  I supplied the dealer with a new list of outstanding issues, including:

February 18, 2022:  I took the trailer back into the dealer to complete the remaining items

March 10, 2022:  I learned that the Vinyl (linoleum) was completed and they found no trouble with the wiper seals that I had carefully documented, including recommendation from Alliance re:  how to fix it.   I insisted that they go back and read emails, but to take the time to do the job right, as I would be out of town for the following week. The service writer insisted he would keep me informed via email

March 21, 2021:  I had not received any email communications, so I visited the service manager to see why.  I was told that the trailer was 100% ready except for the Pullrite capture plate which they would install at delivery time, to avoid damage from their forklift.  I requested a delivery of 4:30 pm on March 22, 2022.  I also requested that the trailer would be plugged into shore power and the refrigerator powered up to level “4”.

The above list is the incompetant part.  they washed the trailer’s exterior but no one tested the refrigerator or checked anything else, for that matter.

March 28, 2022: The dealership called me late in the afternoon  to tell that they were not able to plug the trailer in (to test the refrigerator door) but that it would be ready for pickup at 5pm.  I declined to pick up the trailer, asking that they fulful my request to plug the trailer in for several hours before pickup.  At the end of the day I received an email stating that they had inspected the trailer, that all repairs were completed, and that i would be free to conduct my own pre-camp inspection at my leisure.  I thought that part was good. 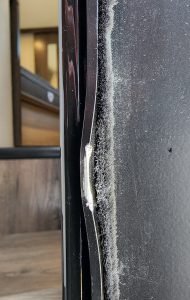 Damaged front door frame, likely caused by someone slamming the hinged stair assembly into place without operating the latch.  Such a force bent the aluminum out of place. 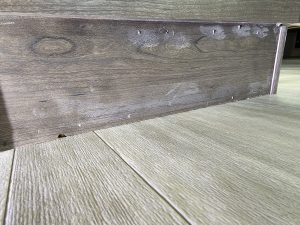 The permiter of the kitchen island sustained some damage while it was removed and replaced as part of replacing the vinyl.  This putty job passed the quality inspection of both a service manager and  a service writer.  They offered to install molding around the perimeter to cover up the pro blem, so that was good. 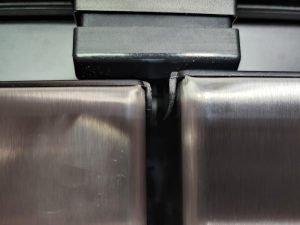 The refrigerators doors were misaligned, with the right-hand door having been shimmed up, without shiming up the left-hand door to match 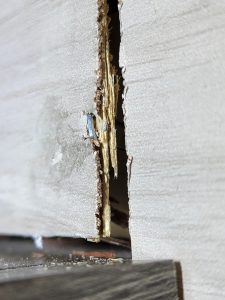 After that experience I took my trailer back home, awaiting next steps from the dealer.

May 7, 2022:  I received a text message from the dealer stating that most repairs were completed,  that I can come pick up my trailer now while they wait for parts, and that I owed nearly $400 in repair bills!   Let that sink in:  I had my trailer at home for five weeks, and yet they invite me to come get it and tell me I owe for out-of-warranty work!  I replied to that message asking for clarification, and it turned out that a new service writer had been assigned (#5 in one year), and the previous service writer had not updated the work order.  The new service writer asked me if I was in physical possession of my trailer, and assured me that there would be no out-of-warranty charges

May 10, 2022:  I wrote (via SMS text again) and asked for the status and next steps.  The service writer replied the next day, saying that they have parts on order and will schedule the repair when they arrive.  I asked the service writer to layout the next steps, tell me what parts they are waiting for, what will happen when the parts arrive, and what is the plan to finish things up.  I’m waiting to see if their list is complete — it should include (1) new 1/4-round molding around the kitchen island to cover up their damage, (2) new bed panels to replace their awful workmanship noted above, (3) fix the door frame that they damaged, and (4) fix the fridge doors that they left out of alignment.

June 4, 2022:  The dealer contacted me via SMS, stating that “a part ordered on 5/7/22 and two other parts on 5/11/22.  We have a seal for the slide on order and some parts for the kitchen island.”   I asked what slide seal they ordered and to tell me what they planned to do with the damaged front door frame.  no response, and there is still no recogniation of the door frame damage.

July 1, 2022:  The dealer contacted me via SMS, stating that they got parts in and that their schedular “has a big list to go through so she will get to you as soon as possible.”   Something didn’t make sense so I contacted Alliance and discovered that they had ordered the wrong parts for the island (to repair their own damage) and that they (Alliance) had been able to straighten things out.

This story is geting long and arduous, and  I just don’t have the engergy to babysit this dealer anymore.  Its now July 12, FIFTEEN WEEKS after reporting the issues on March 29, when they told me the trailer was “100% ready”.  I have encountered a couple of new minor issues which by themselves don’t concern me — one is a staple coming loose in the roof (an easy repair.  just make a short slice through the PVC membrane, pull the staple, and then repair with self-leveling sealant).  I also found a cracked plastic cover for the breaker panel in the main living area, which probably happened during one of the dealer’s previous repairs.  Alliance sent me a new one.