Greetings RV enthusiasts.  In previous posts, you’ve probably read about the issues I’ve had with my Western Digital “My Passport Wireless Pro”, while attempting to use it (as advertised) as a Plex media server.  Suffice to say the concept is really very good and I really wanted it to work (I even  bought a nice carrying case for it) but the implementation is very poor.  Frankly, the solution fell flat on its face in my trailer, and no amount of FAQs or best practices could make it better (believe me I’ve read them all).  I even corresponded with Western Digital on the subject.

But now its the winter of 2021-2022,  and time to build a real PLEX media server solution for next season. I’m not going to cut corners this time — I’m going for reliability and performance,  because when it’s time to relax at night in front of the TV, I don’t want to spend an hour tinkering — that means a real media server behind a real network.

what does the current RV industry state-of-the-art have to do with Plex?  read on 🙂

Background thoughts on the RV industry (and mobile internet)

Allow me to digress for a moment to make a few observations.  The RV market right now is crazy:  The international supply chain problem has made a huge impact, and the Biden price inflation to the point where its just not financially attractive to enter the RV market right now — unless of course you have a pile of money and wish to invest in building out an RV park or something.  But plain ordinary retail RVing is just getting too difficult and expensive.

Had my wife and I not already invested in our fifthwheel,  I’m not sure we would enter the RV market right now (December, 2021) for these reasons:

I’m convinced that the only way to survive in today’s market is to do as many repairs as you possibly can yourself.

As I described in this post, one very effective way to build a network inside your RV is to use the Pepwave SURF SOHO router, and this is a very good choice if you have very little (or intermittant) need for mobile internet.  Yes, the SOHO will accept USB modems (a feature that originally attracted me) but upon further investigation I determined that hanging the modem from one manufacturer onto the router from another, was not a recipe for reliability and frustration free networking.

And now, back to your regularly-scheduled programming

Here’s an inventory of what is needed to build a real plex solution:

Note: At the time of this writing (Winter, 2021-2022) , cellular technology is changing rapidly so it might not be the best time to enter the celluar market, unless of course you have an immediate need.  According the the Mobile Internet Resource Center,  the suppliers of Wifi chipsets have stopped production, so when Pepwave’s existing inventory is gone — its gone.

Note:  The other reason I picked the DS 220+ is because it can provide other NAS goodies, such as a shared file server that I can use while on the road.  This will expose the Plex content folder to a laptop computer  for example —  I’ll probably map a network drive to the Synology folder that contains all of my  photos — that way I can work in Lightroom while on the road, push new photos (or videos from my phone) over to the Synology NAS and view them on the RV’s own TV — all without an internet connection.

Here is a rudimentary diagram of my solution, using the pepwave SURF SOHO.  While on the road, “Wifi WAN” is not available but the Surf SOHO runs the local private network just fine.  Plex throws a little fit at first startup, but once you ignore that, it will calm down, go into “offline” mode and stream beautifully. 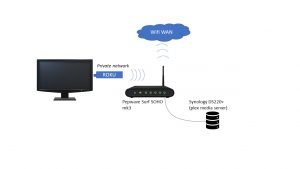