In a previous post (The Garmin RV1090 product review) I referenced the plethora of gadgets and gizmos available in the RV market today, remarking that once in a while a product comes along that really makes a difference.  Along with the Garmin RV1090 GPS unit, I place the Hughes “autoformer” in this category as well.

This is a product that is not well understood, primarily (I believe) because of its technical nature, not to mention that public perceptions can, well, be inaccurate.  I’ll get to that in a moment, but for now lets concentrate on what this product is and what it does.

Its a Pedestal checker

Campgrounds may or not supply a reliable source of power — wires can come loose, for example, which can be very very bad.   Enter:  the Hughes Autoformer, which checks the important aspects of pedestal power BEFORE you hook up to it.  For example, in the photo below, notice the four little green lights clustered together near the top center — these indicate the results of four tests performed by the AutoFormer:  For RV “50A service” this means “Leg 1” and “Leg 2”, Neutral and Ground.

When I pull into a campground, the first thing I do to check the electrical system is to turn the pedestal breaker OFF,  plug the Autoformer into the pedestal, and then turn the breaker ON (without connecting to the RV).  This initiates the four tests.  Then, once everything is confirmed good, the pedestal breaker goes back OFF while I then connect the RV.   When everything is powered up, the Autoformer continuously monitors the four wires — as long as it is connected to the shore power pedestal. 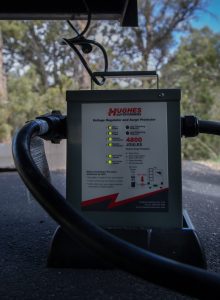 Its a Voltage Regulator

There have been several attempts to explain what the Hughes Autoformer is, and frankly I haven’t seen an inaccurate one — its just that many of them are too complex.   For the geeks among us, I’ll show (later in this post) an example of the math that demonstrates how useful this device is, but first lets just cut to the chase:    Fundamentally this thing is a voltage regulator.   That means it produces a conditioned or regulated voltage supply, which makes RVs happier.  Why wouldn’t your RV be happy without it?  Because the voltage provided by the campground power pedestal might be, “all over the map” depending on how many other campers are plugged in.

no, this isn’t surge protection — this is Voltage regulation.  Here’s an example:  During a recent camping trip I noticed that pedestal voltage was 121 volts — pretty good, actually, and probably not representative.  Conveniently, this particular pedestal provides 50A, 30A and 15A service — so I just plugged in one of Hughes’ own volt meters, as shown below: 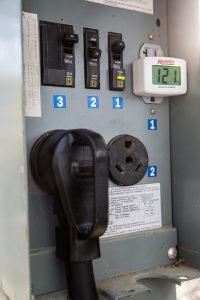 The interesting behavior of the Hughes Autoformer is that it assumes all power pedestal voltages can be boosted by some small amount — 2% to be exact — even in the  best of circumstances.  Thats kinda cool;   I verified this with the little Hughes voltmeters that they sell on their website — the Pedestal was at 121 volts but inside the coach measured 124! (keep in mind that these little volt meters  are rounded to no decimal places and are always subject to a +/1 one “count” error.  Thats why it looks like there is a 3-volt difference when the exact figure is 123.4 volts). 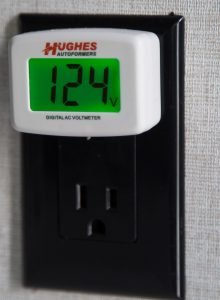 Incidentally, this 2% boost will be applied to any input voltage of 118V or more.  From the Hughes website I see that when the voltage drops to 116 or below, the Autoformer will boost 10% instead of only 2%.  that means a 116V input will result in an 11.6 volt boost, raising this (hypothetical) pedestal voltage from 116 volts to 127.6 volts!

Notice that I am being very careful not to use the term “power” or “power conditioner” because those terms are misleading:  I’m sticking to the term “voltage” because that’s what this thing works with.  Yes, the geeks among us can pull out ohms law and reveal all the happy mathematical relationships between power, voltage, and current — and I’ll get to that.  Fundamentally, just remember its about Voltage.

Here is a photo of the Autoformer “guts”, in case you’re interested 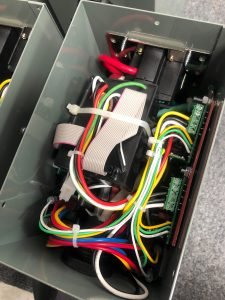 Its a surge protector

RVers are no stranger to the need for surge protection, and there is no lack of available gizmos that you can apply to the problem.  Where the Autoformer adds value is that their surge protectors are replaceable modules, so that if you actually have to use them you can just buy another module.  look again at the indicator lights, showing surge protector health for both L1 and L2: 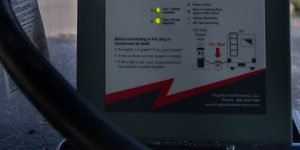 I promised I would get to this, so here goes.  consider the case where the Autoformer sees 116v or less, and boosting 10%.  Check out what happens mathematically to the actual power that is consumed in the RV — say for an InstaPot.  The relationships between voltage, power, and resistance (the InstaPot heating element) are well understood, so all we have to do is look at the power consumed by the InstaPot when the voltage is 10% higher.  Bottom line is that power is proportional to the square of the voltage — so if voltage increases by a factor of 1.1 (10% increase), the real power consumed by the heating element is 21% higher!    The algebra is shown below — note that:

P1 =  power in watts when voltage is nominal 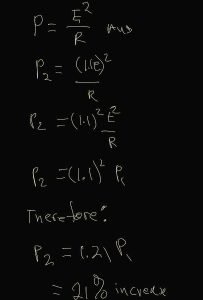 So there you have it — when shore power at the pedestal is low (116v or below), the Autoformer will allow your InstaPot to heat 21% hotter, cook 21% faster, etc.

Without going deep into the concepts of induction motors and the efficiency losses when voltage is low, suffice to say there are similar benefits to the above.  I’ll defer to the Hughes website for additional information regarding the benefits of motors, especially those running AC compressors.

First of all, as I mentioned previously I don’t really like the term, “Autoformer” because it is too close to the term “AutoTransformer” which is a completely different animal.  Some confusion exists when confusing the terms: