Those who have followed my work know that I have a proclivity to exposing junk products, especially the snake oil in the Hot Tub industry, while highlighting useful ones.  I do enjoy it when I find a product that DOES work — a product that does something useful and that I find effective in my own spa.

One such product that has been on my radar is a maintenance product, designed to be used weekly.  There is no “shoot out” here;  just results of my experimentation thus far with a product from the makers of “Ahh-Some”, known as “Hot Tub Serum”.

Why would we need both “Ahh-some” and “Hot Tub Serum”?

Those familiar with the “Ahh-Some” product know that it’s primary active ingredient comes from a family of compounds known as “Quaternary Ammonium Cations”, sometimes referred to as “QUATs”.  Ahh-some is a gel product containing a very high “QUAT” concentration —  the formula has been shown known to break through the protective fat layer of biofilms, and my own experimentation confirms that “Ahh-Some” is far superior to any other purge product on the market, at the time of this writing.

With this background, I was intrigued to  discover the relatively new product, “Hot Tub Serum”, with an active ingredient of approximately 9% “QUAT”, according to the label.  I’m not a chemist so I cannot comment on the differences in the active ingredients themselves (ahh-some versus Hot Tub Serum), other that the fact that they are different “QUAT” concentrations.  However, the similarity piqued my interest in the use of such a formula as a maintenance product.

What does this stuff do?

The primary claims of the “Hot Tub Serum” manufacturer involve improvements in water clarity and in ease of water maintenance.  This is interesting, because those of us with impeccable water maintenance skills are usually reluctant to adopt a new product claiming to improve upon our own perfection.  I decided to be honest with myself and realize that I wasn’t 100% perfect 100% of the time, so I decided to put this product through a couple of scenarios “near the edge of good water maintenance.

My first test was to deliberately simulate a “less than perfect” maintenance scenario — such as a vacation or similar circumstance where the sanitizer level is allowed to reach zero.  To set up the test, I used my (Bromine at the time) hot tub normally, on one occasion, but did not add any new sanitizer to oxidize the bather waste.  This approach guaranteed that the bad guys would have a chance to grow, and resulted in a very nice cloudy soup of “water gone bad”.

This is a scenario that happens, for example, when you don’t have a floater, and you haven’t shocked the tub strong enough prior to leaving on vacation.  Such a condition normally requires a SLAM (“shock level and maintain”) treatment and up to four days to recover, at least in my experience,  before the spa is usable again.  This time, however, I used a modified SLAM process — I did the “SL” part but not the “AM”  part!   In other words, I  added the recommended dose of “Hot Tub serum” (per label directions) and a one-time “shock level “of Bromine,  In other words, I let the two products work together.

It turned out that, by the time my sanitizer level had dropped to safe levels, my water was clear again!  This told me that the use of Hot Tub Serum was in fact better than a traditional process of attenuating biofilms with a prolonged high concentration of chlorine (SLAM).  Good to know. While this was an empirical  and “preliminary” result, it nevertheless formed formed the basis for future experiments, which would be more data-driven.

Due to my personal schedule there was no way for me to establish a “baseline of contamination” (an experimental control), so it was physically and statistically impossible to actually measure the rate at which the the two chemicals (the Hot Tub Serum and the Bromine) “consumed” contaminants to produce a usable spa.  I simply observed that Hot Tub Serum  cut the the process approximately in half — what would normally require 2-4 days  using traditional SLAM now took 1-2 days.  Apparently, the QUAT ingredient is an effective supplement to traditional sanitizer (chlorine or bromine).  I’ll have to experiment with that more, later.

As you can see here, I am making no attempt to describe the technical detail.  There will be no chemical equations here —  I’ll let others pontificate on that.   I simply want to know what EPA knows about the product,  and I want to know how it works in my spa.

With the previous observation I was now in a position to more carefully determine the performance of “Hot Tub Serum” – but this time, my goal was to test something more meaningful to those of us who are proud of our water maintenance skills —  the sanitizer decay rate in otherwise “normal” appearing water.   Here again, forming a controlled experiment was very difficult, but I established one that would at least be of interest:  I performed a sanitizer decay rate test before and after using the Serum!  To accomplish this, I waited until my water was near the end of its drain interval — and then measured the bromine decay rate under “no bather load conditions”.   This experiment was performed during the summer months during which I did not use  my spa at all — I reserved its use, for nearly four weeks, solely for the purpose of measuring decay rate — so that my experimental results would not be confounded by use of the spa.

After establishing a “baseline” of bromine decay rate I decided to treat my spa with the recommended dose of “Serum” for two weeks.  During this time, I  held the sanitizer level at normal levels, but the spa was under “no bather load” of course (no use of the spa for this time period).  To my astonishment my data showed that a two-week treatment with Hot Tub Serum did improve the Bromine decay rate. 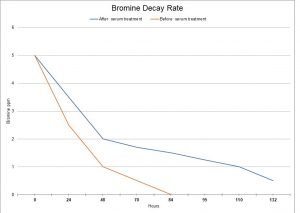 I can already hear heads exploding that something unknown is accomplishing something good. The typical response to resist new information is to reject it ,but I’m taking a different approach because I want to learn something.  What I learned is that the EPA was right — this stuff does attack the bad guys in residential situations as described on the label.

The graph shows a result at “hour 48” that is interesting:  before treating with “Serum” my Bromine level baseline (see the orange line in the above graph) decayed  from 5ppm to 1ppm  over 48 hours.  This is equivalent to a “24 hour decay rate” of approximately 40% — a bit high, compared to the standard rule of thumb which suggests that the 24-hour decay rate should be closer to 25%.  This is clear evidence that organic contaminants were consuming the sanitizer — the remedy for which is typically a purge with ahh-some or (for the traditionalists) a SLAM (“shock level and maintain”) treatment.  Instead, I treated with the Serum just to see what it would do.

After two weeks of Hot Tub Serum, I repeated the sanitizer decay test ,which produced the blue line in the above graph.  Note the “after Serum” treatment  shows a decay of 5ppm to 2ppm, over  the first 48 hours, which is equivalent to a “24 hour decay rate” of 30% — much closer to the accepted rule of thumb.  The other important point is that the Serum treatment resulted in a much more gentle and “stretched out” decay rate.  You can see that I stopped measuring after 132 hours  (over 5 days)!   incidentally, my ozone generator was disabled during these tests (ozone produces small amounts of Bromine, which would have confounded my results).

The real story lies in the shape of the curve, and how far out it extends:  How many spas can start at 5ppm and still have a measurable Bromine level after 5 days?  Consider the time period between 48 and 132 hours– equivalent to a “24 hour decay rate” of only 20%.  That means the Hot Tub Serum likely took out the bad guys that were present when I set up the experiment.  So this stuff really is an EPA registered biocide.

These data are far from complete and are not statistically valid — but they do represent a result that needs to be validated with further experimentation.  Hot Tub Serum appears to be an attractive product that not only accelerates the water recovery process — in my results, the product allowed me to use a traditional shock treatment — without the “maintain”

As a practical matter, I have been experimenting with Hot Tub Serum for a couple of years now, and find it to be extraordinary.  It has made water maintenance easy, and is especially useful when sanitizer levels drop into the low single digits.  Better yet, I now know why — the EPA registered biocide is taking on some of the bad guys, which improves my sanitizer decay rate.  Does it eliminate the need for known water recovery procedures such as shocking?  Of course not.  It’s EPA registered biocide just helps things along.