Greetings RV enthusiasts; this post is about inflation pressures and tire blow-outs.  I’ll start by discussing the topic as it relates to ambient temperatures, draw a few conclusions guided by a key engineering principle, and then present a prioritized list of blow-out causes, obtained from my research.  I’ll anchor the discussion around my own tires:  4410-lb, 75mph ST tires, with a “cold” inflation pressure of 110psi. 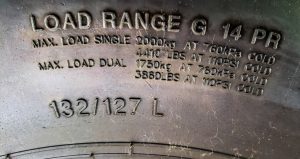 Suppose you camp at Flagstaff, AZ in the month of May (where the low temperatures average approximately 34 degrees F), and you  dutifully fill your “G” rated trailer tires to 110psi in the morning (when it is “cold”).  Then suppose you travel approximately 150 miles down the hill to Phoenix where the high temperatures are in the 90s (the average high temperature in Phoenix, in May, is 94 degrees, F).  Have you properly inflated your tires for Phoenix?

In High School, we all learned about the “Ideal Gas Law”, which tells us that the air pressure inside of a sealed container is proportional to the temperature of the air inside:  When temperature drops, air molecules become less active and pressure drops;  when temperature rises, air molecules become more active and pressure rises.   This means when we stuff the required number of “cold” air molecules into a tire to achieve a certain pressure, and then we heat that tire up, its pressure will rise.  Fortunately, a lot of people have studied the pressure-temperature relationship in real tires and we can predict what will happen with “good enough” accuracy.  TireRack.com,  for example, tells us that for every 10 degree (F) change in temperature, we can expect a 2% increase in tire pressure.

Back to our original question:  Have we properly inflated our tires for Phoenix by filling them in Flagstaff?  The short answer is no — in our example, the (approximately) 60 degree temperature difference would itself produce a 12% increase in tire pressure. In other words, by the time you reach Phoenix,  you running tires would be over-inflated by roughly 13 psi.  Put another way :  By the time you (unloaded) spare tire acclimates to Phoenix, it would measure about 123 psi — assuming of course that you inflated it to 110 psi back in Flagstaff.  By the way — if anyone reading this blog has made such a trip, please let me know your results!

Is 13 psi over-inflation enough to cause a blow-out?  By itself, I doubt it, although I don’t recommend experimenting to find out!    Classic Engineering “rule of thumb” guidance tells us that differences of 10% or more are significant, which means that our (theoretical) 12% increase in tire pressure is just barely so. Considering that we don’t hear of many blowouts from trailers making the trek from Flagstaff to Phoenix,  my conclusion is that ambient temperature changes, in large part, are not a primary cause of blow-outs.

How do I know if my tires are properly inflated?

I look at this from the perspective of the numbers written on the sidewall:  The numbers tell me that 110psi is required to support the rated load of 4,410 lbs.  That is clearly the minimum air pressure that the tire must see in order to work properly!  Go below 110psi and it won’t support the weight — its that simple.   The Sidewall also tells me that if I fill my tires to 110psi “cold” that the tire will support that weight while rolling down the road at 75 mph.  From this I conclude two important things:

So the sidewall just told us the conditions under which the tire is designed to operate, including its (approximate) running psi in hot weather.  The lawyers have apparently stopped manufacturers  from saying “maximum pressure is X”, but we can characterize this for ourselves — with the use of a Tire Pressure Monitoring System (or frequent stops!).   All we need to do is the following steps

The point of the exercise is to characterize your own tires and learn how they behave within the parameters for which they were designed — so that you can easily recognize when they are not.  Most of us, for example, who pay attention to our tires see pressure increases of less than 20% during normal driving, even in hot weather.  That means up to 130 psi for a 110psi tire, however — as the expression goes:  YMWV  (your mileage WILL vary!).

A Tire Pressure Monitoring System is a godsend for monitoring tire performance on the road.  When things start to look funny you can react — typically by slowing down or even stopping.    Here’s some suggestions: 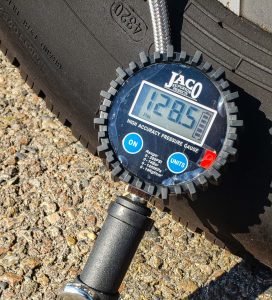 My “G” rated tires were inflated to 110psi, but after rolling down the road in 85 degree weather, they measured 128 psi.

I always carry a high-volume portable air compressor that is capable of adjusting the pressures in my trailer tires or my truck’s tires. While I haven’t yet been through a dramatic change in ambient air temperature that requires such action, I’m ready!

Maintaining tires includes monitoring them while rolling down the road to make sure they are operating within their design parameters of load, speed, and pressure.  While it is important to “babysit” tires in this way, and even to make an air pressure adjustment in response to extreme circumstances changes in outside air temperature,  I am not convinced that air temperature alone could be responsible for tire blow outs.  In other words, it can certainly stress a weak or over-loaded tire, but it’s not the primary cause.

So its  not that…

With the above, it’s clear to me that over-inflation due to environmental or local real-time weather conditions is not a likely cause of tire failure – including the familiar stories of  so-called “china bombs” that pop up on the forums from time to time.  In fact,  according to one tire expert I talked to (from a respected West Coast chain), tire blow-outs while driving down the road are more likely due to low pressure —  not high pressure due to rising outside temperature.

At first, it seems counter-intuitive to suggest that loosing air would cause a blow-out.    After all, most of us (especially having seen the damage done by such an event), naturally perceive of a blow-out as an explosion.  A tire is just a container of air — and aren’t explosions caused by too much pressure in the container?  I’ve been able to interview a number of tire experts (all from the West Coast chain mentioned previously), and have received some very practical and consistent advice on this topic.  It turns out that the explosion we call a “tire blow-out” is caused, not (primarily)  by rising pressure inside the “container”,  but (more likely) by weakening the container itself, due to heat.   In other words, a tire (usually) fails before it blows-out.

Heat is the enemy

Having identified heat as the primary root cause of tire failure, it is good to consider what causes a tire to heat up . Here are the most important factors,  in order of their importance:

In addition to heat, there are some environmental factors that can also weaken a tire: