This post describes my September, 2020 test of two additional products against “Ahh-some”, the current king of purge products.  For this test, I continue with my normal protocol, which is to purge with one or more “under test” products and then purge again with Ahh-some to see what the others leave behind.

The two test products this time have the consistency of fine, white granules, similar  to each other in their appearance and in their label directions.  Both appear to be some combination of surfactants and/or detergents.  SpaGuard, “System Flush” lists only one ingredient, “Sodium Sulfate”, which is an inexpensive filler used in laundry detergents.  I should note that nowhere on the  product label does the SpaGuard product claim to remove biofilm, so I left that off of my expectation list.  It does, however, claim to remove, “built-up grime, lotions, body oils, skin and hair care products, and debris”.  Since ordinary Borax at the grocery store will do all those things to some extent,  I would say the SpaGuard product is another one of those cheap compounds in a really expensive container.  It probably does something, especially in a poorly-maintained spa, but probably won’t do more than ordinary Borax, which I have already tested (see the foundational pages refenced in the Hot Tub home page).   I decided to let this one “bat first” for this experiment.

EcoOne “PIPE cleanser” appears to be just as benign as System Flush but with a few more ingredients — surfactants, cleansers and softeners to be specific (again, all properties of Borax…).  This one DOES claim to scrub away biofilms, however, a claim that has never been proven or verified (that I know of).   I decided to give it the benefit of the doubt, and allow it “bat second” so it could clean up whatever gunk the detergent filler (System Flush) left behind.

For these tests, my water was a good nine months old but well maintained via regular use of “Hot Tub Serum Total Maintenance” — a product that has been validated (by the EPA) to control biofilms when used regularly, as directed.  Accordingly, I didn’t expect much biofilm to have accumulated in my spa, but I was anxious to see what these two products might find. 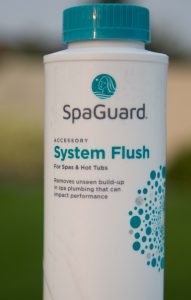 Following the label directions, I dumped the entire bottle of “System Flush” into my tired, old water and ran the jets for the prescribed amount of time. I did get a result — a tiny amount of sudsy like substance on the walls, as shown in these photographs : 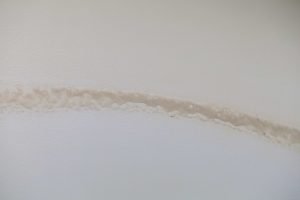 This was not a very profound result — I even speculated that the suds shown in the photograph might actually be just the product itself!  But I reminded myself that it doesn’t claim to remove biofilm and that my water was well-maintained —  so you could argue that there wasn’t anything to find.  In any case, I noted the result and then drained and refilled in preparation for the EcoOne test.

Even though the EcoOne label directions suggest dosing with only half the bottle,  I decided to give it the best chance I could:  I dumped the whole bottle into my newly filled spa.  Boy, were they right about the “no foam” claims! (see the next photo). 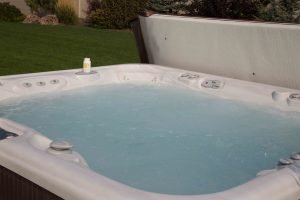 Per label directions, I ran the jets for one hour after which I did see a tiny result: A faint, light-brown colored deposit on the vessel wall which had the appearance of  skin oils and/or lotions (this could not possibly be “suds” produced by the product itself, because the product produced none).  Look closely in the photograph below and you can see this deposit, on the wall to the right of where my spa pillows are supposed to go (I removed the pillows because they frequently collect biofilm when I purge with ahh-some). The faint, brown-colored deposit looked nothing like the material that ahh-some releases, and was easily wiped up with a small rag.  So the product did something — just not a lot.   I then drained and prepared for the ahh-some challenge. 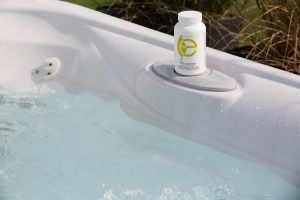 To continue the tests according to my protocol I drained the spa and filled with fresh water before testing ahh-some. To disadvantage the Ahh-some, I dosed with only half of the recommended amount.  Look what the hamstrung Ahh-some dose released, after both SpaGuard and EcoOne had done their thing: 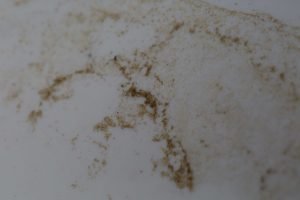 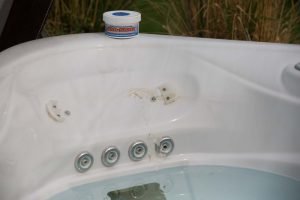 Knowing that Ahh-some softens the outer fat layer of biofilms to dislodge them from the pipes, what I saw was not surprising:  The release had the familiar appearance of biofilms, something I have become well familiar with, over the years.  The other two products removed what little skin oils and such that were in my pipes, but they released nothing like this.

The previous tests showed that both  System Flush and PIPE cleanser are worthless, over-priced placebos if your expectation is the removal of biofilms.  They each produced a small result, and would probably impress when used on a poorly-maintained spa but for the purpose of purging your spa of biofilms they get a big raspberry.

Why did ahh-some release such a small amount of material?

Those who have followed my work and performed purges themselves will note that the above is a pretty small amount of biofilm, even for a half dose of Ahh-some.  This is because I had meticulously used “Hot Tub Serum Total Maintenance”  throughout the life of the water, prior to purging.  Among other things, “The Serum” contains a low-concentration of the same active ingredient found in Ahh-some — the one that softens the outer fat layer of biofilms so that they can dislodge easier from pipes and equipment.

Yes, I used a half-dose of Ahh-some, but it turned out that after I added the rest of the prescribed dose I got no new release!  Ahh-some had successfully  “batted clean up” with only half the recommended dose.  Interesting.

What about the filters?

Readers of this blog know that I clean my spa filters in the vessel itself, while dosed with Ahh-some, and I did that for this experiment as well.  This time, I discovered something I should have long ago — if I set the water level just right, my jets will produce a vigorous scrubbing action for my filters!  I “hang” my filters on a piece of PVC pipe, and the contours of my spa orients them just right so that they benefit from the scrubbing action of my jets.  The below photograph shows what many spa owners never achieve:  Filters in the vessel, with Ahh-some in the water, producing no new contaminant release!  THAT  is a clean spa. 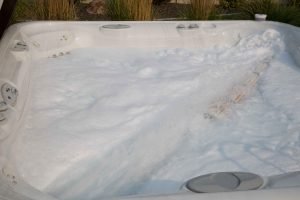 Here is a summary of my findings from this experiment:

This experiment revealed one more interesting fact:  I dosed my spa to 20ppm chlorine (with ordinary bleach) just prior to dosing with Ahh-some.  Within 30 minutes, 75% of this chlorine was consumed — further evidence that chlorine was necessary to help destroy the biofilms that ahh-some released.

A Post Script re: filters:  One helpful reader asked why I put my filters into the spa, when the Ahh-some directions plainly say to remove them.  For SURE — when purging with ahh-some it is best to completely remove the filters because the gunk that will form is likely to gum things up and starve your pumps.   During this portion of my regimen I place my filters into the vessel itself (NOT in their normal positions), to benefit from the ahh-some dosed water.  You just have to be careful that they don’t bang around and become damaged (hang them on PVC pipe for example).

Another insightful reader  asked what kind of  bleach I use during the ahh-some purge.  I use regular Clorox  (or pick your brand) bleach.   It is vitally important to use pure, un-adulterated regular, plain bleach from 6-8% sodium hypochlorite! Just read the ingredients;  actual concentration can vary with brand and formulation.  When in doubt get the highest concentration you can, and do NOT use splash-free or scented products, or you will have a mess on your hands!

One other comment on liquid “sodium hypo” as it is sometimes called.  I have seen “shock” products with as much as 12% sodium hypo — that’s good of course, but ordinary grocery store bleach works well, even in concentrations less than 8%.